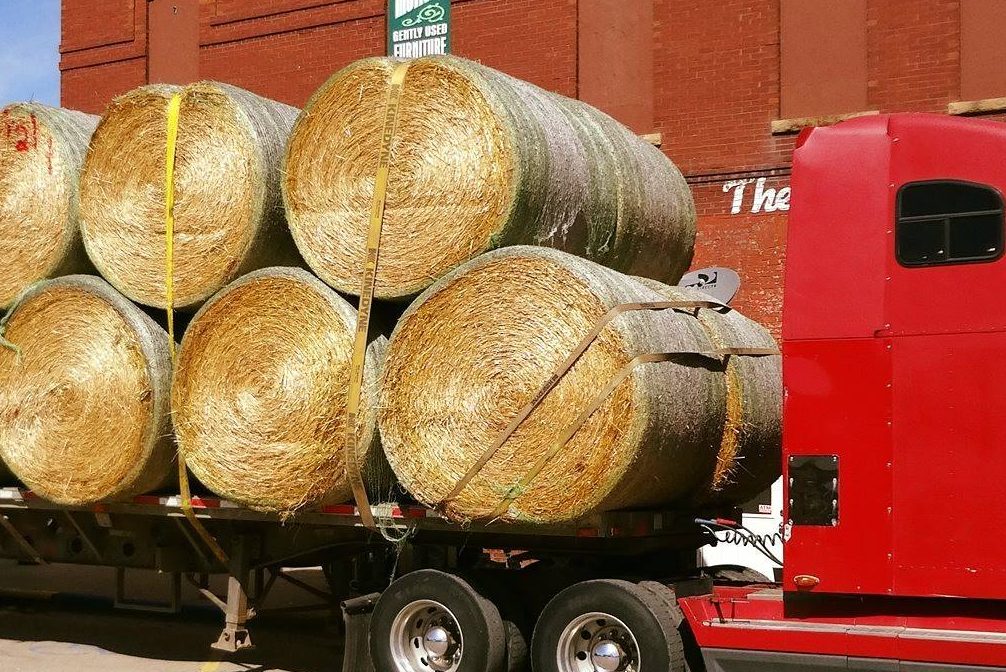 ATTENTION: WE WILL ONLY BE HAVING THURSDAY AUCTIONS. WE HAVE HAY FOR SALE PRIVATE TREATY ON OUR WEBSITE. PLEASE CHECK OUT THE "HAY FOR SALE" TAB AT THE TOP OF THIS PAGE._______________________ Rock Valley Hay Auction has been selling hay and straw for over 70 years. We sell on average 4500 loads annually. Let our experience in hay and straw marketing work for you.

Auctions are currently Thursdays @ 12:30p.m. Monday auctions are held November through April in addition to the year around Thursday sale.

We WILL be having a sale today, April 16, at 12:30 p.m. We ask that if you attend the auction to please practice social distancing. Thank you

We now have the option to view select loads that we have for sale via our website. Please follow the link below to our Rock Valley Hay Auction Gallery and click on the pictures for details on the hay. If you have questions or wish to purchase a load, please call Paul at 712-470-1274.

If you are no longer receiving our newsletter via email, please check your spam folder. We are working to try to resolve this issue. Thank you for your patience.

Winners from our hay day!

Prize categories are as follows:

We have a very nice load of net wrapped round bales- grass with a little bit of alfalfa.- 22.42 ton. This hay has been stored inside and will be sold at our auction tomorrow! Sale starts at 12:30. Come check out this dandy load and many more loads that we will be selling tomorrow. …

We have a number of loads of cornstalk bales available for our sale today! …

Market was steady on a very light run.

An old married couple no sooner hit the pillows when the old man passes gas and says, “Seven point.”

His wife rolls over and says, “What in the world was that?” The old man replied, “It’s fart football.”

After about five minutes the old man lets another one go and says, “Aha! I’m ahead 14 to 7.”

Not to be outdone, the wife rips out another one and says, “Touchdown, tie score.”

Five seconds go by and she lets out a little squeaker and says, “Field goal, I lead 17 to 14.”

Now the pressure is on for the old man. He refuses to be beaten by a woman, so he strains real hard.

Since defeat is totally unacceptable, he gives it everything he’s got, and accidentally poops the bed.

The wife says, “What the heck was that?”

We had a heavy volume today! Market trended a little weaker today, and quality varied greatly.

We had a heavy volume today! Market trended a little weaker today, and quality varied greatly.

The market was lower today with not much motivation from the buyers. We are working to get them motivated.

10. They have a range of about 20 miles before they overheat, break down, or run out of gas.

9. Only the owner knows how to operate the door to get in or out.

8. It is difficult to drive fast with all the fence tools, grease rags, ropes, chains, syringes, buckets, boots and loose papers in the cab.

7. It takes too long to start, and the smoke coming up through the rusted-out floorboard clouds your vision.

6. The Border Collie on the toolbox looks mean.

5. They’re too easy to spot. The description might go something like this: The driver’s side door is green, the right front fender is yellow, etc.

4. The large round bale in the back makes it hard to see if you’re being chased. You could the mirrors if they weren’t cracked and covered with duct tape.

2. Who wants a truck that needs a year’s worth of maintenance, u-joints, $3,000 in body work, tail-lights and windshield.